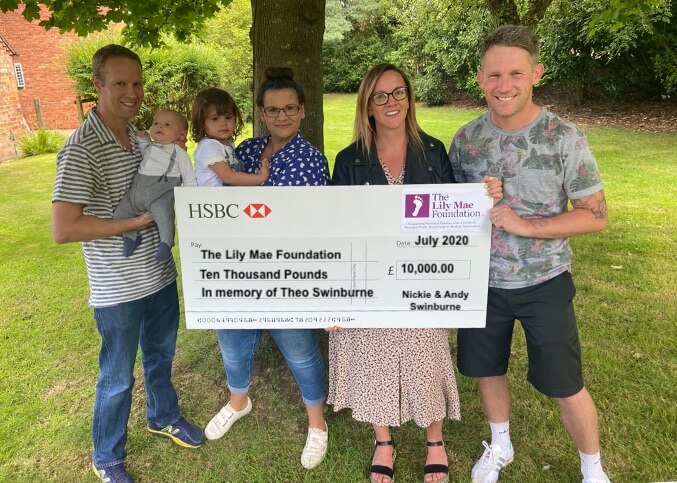 Bereaved family support babyloss charities following stillbirth of son, Theo.On the eve of what would have been their son’s fourth birthday, a family from Staffordshire are supporting babyloss charities in order to support other bereaved parents during a difficult time for fundraising.In the UK, 1 in every 250 pregnancies ends in a stillbirth, a higher frequency than that of cot death. It equates to 8 babies every day and yet many of these are potentially avoidable deaths. 60% of stillbirths are still unexplained.On 25th July 2016, Nickie and Andy Swinburne, of Fradley, Staffordshire, attended Queens Hospital in Burton after reporting reduced movements at 41+1 weeks gestation. Their son, Theodore, was stillborn later that evening after staff in the hospital missed critical warning signs that their baby was in distress.The Serious Investigation Report published by the Trust concluded that the root cause of Theo’s death was ‘a period of terminal asphyxia.’ Their world crumbled around them as they tried to deal with the loss of their son when only a few hours before all had been well at a midwife appointment.Derby & Burton Hospitals NHS Foundation Trust, which runs Queen’s Hospital, admitted liability in 2018 and the case was settled in full only a few months ago, shortly before Theo’s fourth birthday.Nickie Swinburne (36) and Andy (37) are now using their settlement to support the charities that have supported them. The couple have been primarily supported on their bereavement journey by The Lily Mae Foundation and as part of celebrating Theo’s 4th birthday, have today handed over a cheque for £10,000 to its founders, Amy and Ryan Jackson.Ryan and Amy Jackson set up The Lily Mae Foundation following the tragic and devastating loss of their daughter, Lily Mae in 2010 to Stillbirth at full term. The Charity supports parents and families who have suffered the loss of a baby to Stillbirth, Neonatal Death, Miscarriage or Medical Termination. Ryan and Amy said “to receive such a generous donation during the current difficult times is thoroughly appreciated. Nickie and Andy should be incredibly proud of the dignity and resilience they have shown throughout their journey of grief and all that they have achieved in memory of Theo. The financial support they have been able to offer will certainly help us to continue our vast amount of support programmes that we provide to bereaved parents and their families following the loss of a baby. We will be forever grateful for their support.”In addition to supporting the Lily Mae Foundation, Nickie and Andy have also donated a cuddle cot through the charity 4Louis, to Good Hope Hospital as a thank you for their support during the subsequent pregnancies of Theo’s little sister Philippa (age 2) and baby brother Sebastian (3 months). When Theo was first born the memory box that they received from 4Louis bought them immediate comfort in knowing that they were not alone, and the items in the box enabled the little family to make memories that would have to last a lifetime. Theo’s memory box is one of Nickie and Andy’s most treasured possessions, so to be able to support the charity through a cuddle cot donation means other families can spend time in hospital doing the same thing with their babies. Further donations have also been made in Theo’s name to the ‘Heart In Their Hand’ project who supply keepsake gifts for families who have lost a loved one and also to Cruse Bereavement Care who supported Nickie with counselling after Theo’s death.Nickie and Andy said, “Taking up a legal case against the Trust was not something we had originally planned on doing. We know that bad things can happen in all hospitals. Unfortunately, after receiving the incident reports from the hospital, the scale to which errors were made that night became very clear and it was important to us to ensure that the same thing never happened again. Our priority became ensuring that liability was admitted so that lessons could be learnt. We had to fight for Theo’s little life, the life that was cruelly taken away from him, from us. We therefore decided early on that we would use a significant portion of any settlement that was given to us to help the charities that helped us to find a new version of ourselves again. For us it is also another way to keep Theo’s memory alive. He is never far from our thoughts and is always in our hearts but as time passes there is also a fear that he could be forgotten. So being able to support charities in his name leaves a little legacy behind. We chose to donate £10,000 to The Lily Mae Foundation to help them to support other bereaved parents as they have supported us. From the very first grief support day we attended to the group meetings and the Christmas services for our babies, we would never have navigated this horrible grief journey without their help. We will be forever grateful to Amy and Ryan for their support, especially in the earliest days and when we began our legal case. Their advice has been invaluable, and we hope that this small sum of money can continue the amazing work that they do for others. Nobody should have to go through this alone, The Foundation is proof that there is amazing support out there if you can be strong enough to look for it. Not being able to celebrate Theo’s birthday with him or watching him grow up will always leave us with a massive feeling of loss, but we hope that by helping charities in his name he will continue to live on through others.”