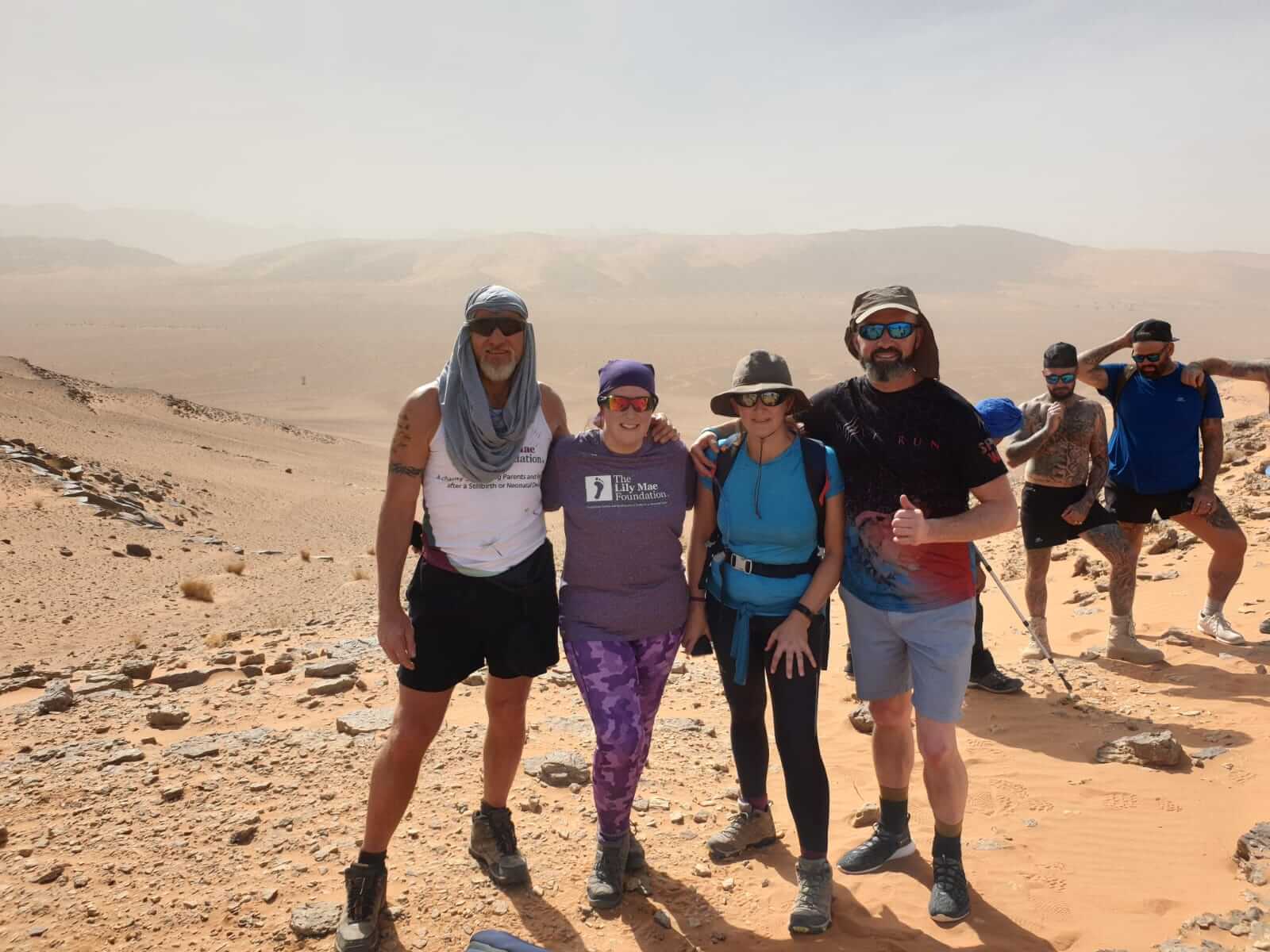 On 09 November, Sharon Harkin, Tracey Pettigrew, Austin Bennett and Anthony Monaghan started their journey to Morocco to take part in an awe-inspiring Sahara Desert adventure, raising money for local Charity, The Lily Mae Foundation. The Lily Mae Foundation was set up by parents, Ryan and Amy Jackson in 2010 following the devastating loss of their daughter Lily Mae to Stillbirth at full term. The charity supports Parents and Families who have suffered the loss of a baby to Stillbirth, Neonatal Death or Medical Termination.The five-day trek covered 100km passing through Morocco’s forbidding landscape punctuated by peaks, gorges, dunes and oases. At night the trekkers sleep under Africa’s star strewn skies and enjoyed traditional Berber hospitality. The gruelling challenge was The challenge went beyond the Jebel Saghro region, starting on the Maider El Kbir plateau, before ascending Jebel El Mrakib, and admiring the stunning views. Walking through palm gorges, the route joins the dry Rhris River and heads towards an oasis of tamarisk trees. The final days were spent trekking along the Tikertouachene River, before celebrating a successful end to the challenge in Ouarzazate.Sharon Harkin said “It was a privilege to work on behalf and alongside the Lily Mae Foundation to help raise so much money and awareness for the fantastic work they do. The training and the fundraising became such a focus that it was only when we got to the desert that the true enormity of what we were doing hit us. The memories of the views, the terrain, the humble Berber people who took such good care of us, and the simplicity of life in a world so far removed from the one we inhabit will stay in my memories forever.’Austin Bennett said “life changing experience doing Sahara trek with like-minded people giving time to worthy charities. A reality check to say the least!!!" Tracey Pettigrew said “The vastness of the landscape is what I will take with me. Staring out at dunes which reached as far as the eye could see in every direction. Truly awesome!”The group raised over £12,000 for The Lily Mae Foundation. A huge amount of money that will continue to help the charity to provide its support to those parents and families who have suffered the devastating loss of a baby to stillbirth, neonatal death or medical termination. Ryan and Amy Jackson said “a truly remarkable and emotional challenge that has been completed by such a humble group. From the moment we met the group you could see the determination to succeed and their interest in the charity and how much their challenge to support the families who suffer the loss of a baby meant to them. We appreciate the amazing support that these guys have shown!”[/vc_column_text][vc_video link="https://www.youtube.com/watch?v=cc6iEKcm9cw&t=7s" src="``https://www.youtube.com/embed/cc6iEKcm9cw``" width="``560``" height="``315``" frameborder="``0``"][/vc_column][/vc_row][vc_row][vc_column][/vc_column][/vc_row]