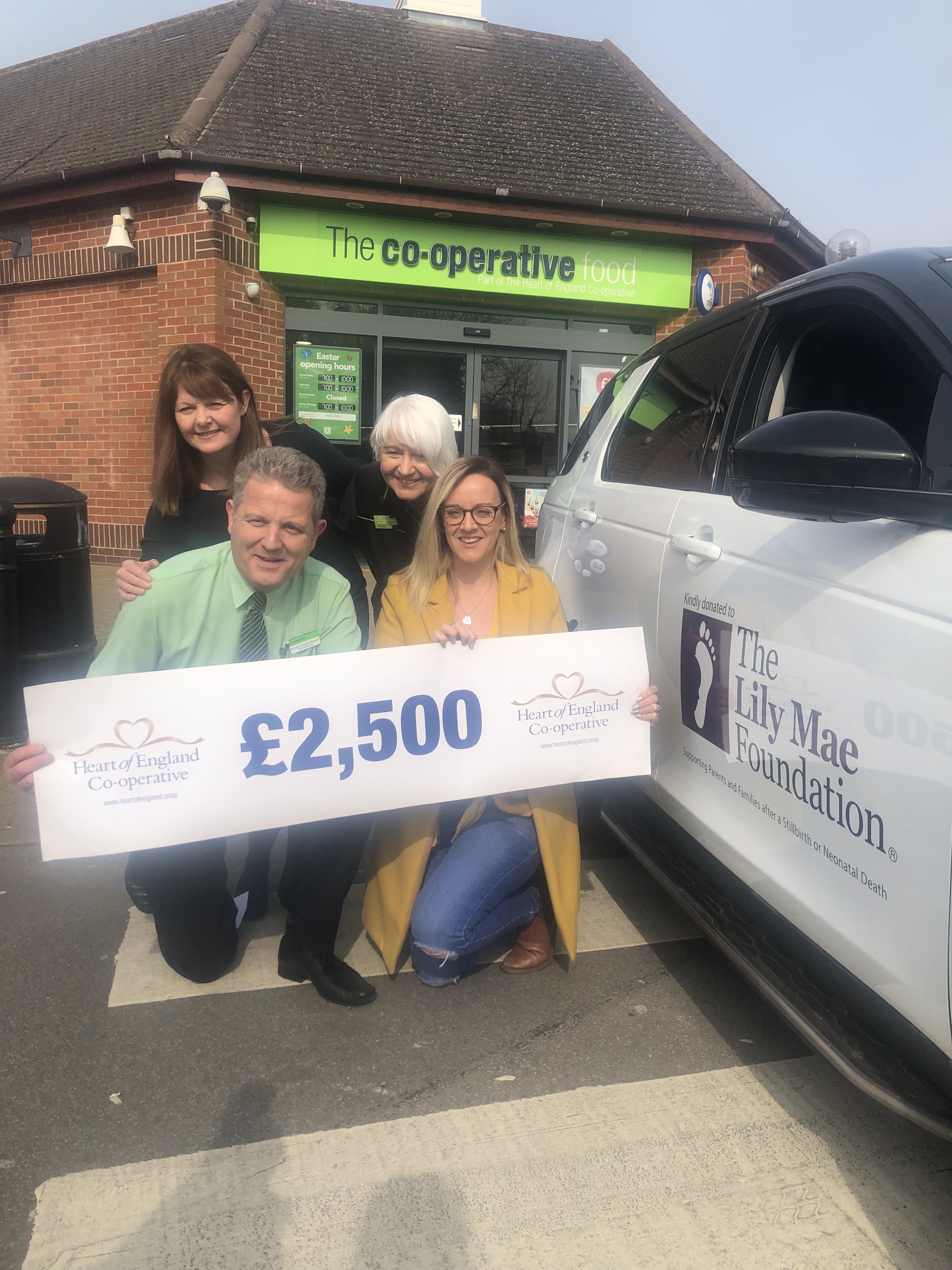 A charity which provides support for families dealing with the loss of a stillbirth, neonatal death or medical termination has been given a helping hand by customers at the Heart of England Co-operative Society.Shoppers in the Coventry and Balsall Common branches of The Co-operative voted for The Lily Mae Foundation to receive £2,500 from the sales of 5p single-use carrier bags over the past six months.It was one of 15 charities from across the Society’s trading area of Coventry, Warwickshire, south Leicestershire and Northamptonshire to receive a share of £25,000 from the sales.Ryan Jackson, who set up the Balsall Common charity with wife Amy, after their daughter Lily Mae was stillborn in 2010, said: “Although we are a fairly small charity we have people from all over the country who contact us for help.“A large part of the work we do is providing hospitals and families with a memory box containing practical items such as clay print kits which enable us to take the prints of a baby which we then transfer on to a silver item of jewellery. We also provide teddy bears and a scented candle, to help evoke a memory, and a book, trinket boxes and other practical items.“We also donate cuddle cots to hospitals, cold mattresses which help parents spend more time with their babies.”Ryan said the money from the Society will help to further extend its work, with the launch of a new campaign, Siblings Grieve Too, helping to bring bereaved siblings together to explore their needs. The Lily Mae Foundation is working with national charity Child Bereavement UK to give its clients specialist support.Ryan added: “We would like to thank everyone who voted for us to receive a share of the money from the Heart of England Co-operative Society.“The money will allow us to continue developing the work we do.“And while the money is fantastic, the exposure of the charity is equally key and has been worth just as much to us. To know people are learning about us every day and appreciate the work we undertake every day is invaluable.”With the second highest number of votes in the Coventry area, the YMCA received £1,500, while the Coventry Boys and Girls Club received £1,000.The Society is among thousands of retailers operating a government levy introduced in October 2015 to reduce damage to the environment.It followed statistics released by the government which revealed that shoppers used more than 7.6 billion single-use plastic carrier bags in 2014, equating to 61,000 tonnes, or 140 bags for every person in Britain.Further research undertaken on behalf of the government revealed the average household contained some 40 carrier bags around the home, while the number of bags dished out by supermarkets continued to rise year on year in the five years to 2014.